Other than a picture of my father and I, the only other picture I have of myself on my wall is this cheeky one, taken by the wonderful Gina-Rae Horvath. The inspiration to get it up on the wall came when I found one of the ultimate pieces of art history kitsch, Gainsborough’s “Blue Boy,” in the fanciest metal frame you could want.

Often paired alongside Thomas Lawrence’s “Pinkey” in ‘un-art-educated’ houses, these works have become so common as to be cliché, so I searched out another secondhand fancy frame and paired up with the Blue Boy as a feminist comment as well as an art-history joke.

I thought, let’s update poor Pinkey, poor pink-for-girl blue-for-boy, that wispy thing who looks about to be blown away in her delicate frock, and replace her with some grrrrl.

But then, I looked her up.

She was born in 1783 in Jamaica, to a wealthy slave-owning sugar and rum family. Her father abandoned the family when she was six. When she was nine, her mother sailed back to England with her and her three little brothers so she could attend a ‘proper’ school—a proper British boarding school to make her into a proper young lady—which could not happen in the colonies, it was supposed.

And we know so many improper things happened, at least to the slaves, out there.

Allow me to introduce Sarah Goodin Barrett Moulton, at the age of eleven.

A year later she died there, probably of some disease we have all been vaccinated against, in the company other children from Jamaican colonial families, and is buried in the proper English earth in doctor’s vault under the parish church.

The day after that, the painting went on display in the Royal Academy exhibition of 1795.

I don’t know if her grandmother, in Jamaica, ever saw the portrait she asked to be painted of “my dear little Pinkey…as I cannot gratify my self with the Original…’

So much for my educated conceit, art history jokes, kitsch, and cliché.

I confess I knew nothing, know nothing.

It’s dangerous to make a joke about the past, especially during a time of pandemic.

We’ll all be blown away.

I had the honour of giving the keynote reading and interview for Portal Magazine’s Portfolio Reading Series, and it’s now on Youtube, and you can see it anytime you like.

It was such a pleasure to talk with Joe Enns because he ‘got’ the book, which doesn’t always happen, and launching a book during a world-wide pandemic is a pretty silent and lonely thing. No festivals, soirées, retreats by the lake… but I’m alive and so many live in places where it has been harder to stay alive. I’ve had cancer, and that put me on a list to get a vaccine earlier than I might have. My family is untouched by the virus. And I wrote a new book, and it’s out in the world now.

I would write books for only the pleasure and challenge of doing it. It’s what my brain does to keep itself happy and in tune. No complaints here. Stay safe everyone, and do a little writing.

Posted on January 25, 2021 by bernicefriesen

Hey everyone, I’m starring alongside Barbarella in the Vancouver Sun’s You secton–Jan. 22 online and Jan 23. hard copy! After being called the Lady Gaga of Saskatoon, I think it’s only right!

Really, it’s not me, but my latest novel, Universal Disorder, being given a great review by Tom Sandborn, and he shows some great writing talents himself.

That photo of me was taken by my good friend, the wonderful photographer Gina-Rae Horvath when she wanted to mess around in another friend’s private junkyard. I keep meaning to get some real headshots taken, but this past covid season, I haven’t felt able to play rockstar enough.

But Barbarella has it all making sense!

I love my kid’s generation. They don’t buy the gender stereotype thing, or even the gender thing. As a farm kid who put on her girlness like a prom dress that didn’t fit and could only play it like a drag queen, it feels miraculous to be told that this is normal.

I can be Barbarella if I want.

Or just a human being.

a “work of glittering brilliance and heart scalding grief”

“make no mistake, while Friesen is working with profoundly tragic elements of human experience here — guilt, loss, madness and dread — she always gets the joke.”

“This is a remarkably well crafted and moving novel. Highly recommended.”

… and you can read the whole of Tom Sanborn’s review in the Vancouver Sun here.

Posted on November 22, 2020 by bernicefriesen

Bernice Friesen reads the first three (or so) chapters of her new novel.

Posted on November 16, 2020 by bernicefriesen

We tried on the 14th to no avail, because Zoom had gone zoombie and not even I could join the meeting! Let’s just try it again in a week’s time! E-mail Fat Oyster to register:

Posted on October 28, 2020 by bernicefriesen

Yes, you can be a Time Lord, too, by attending my on-line book launch in the past, brought to you by McNally Robinson Booksellers and Freehand Books!

Posted on October 23, 2020 by bernicefriesen

Here Comes My Next Novel

Finally off to the printer, here comes my fourth book and second novel with Freehand Books, Calgary, thanks to so many, including Stephanie Sinclair, my agent at Transatlantic, The Saskatchewan Arts Board, and The Canada Council. I’ll be launching somehow, on-line or otherwise in the fall, however I can in this new viral world–and thank goodness books are still safe entertainment!
Posted in Books, Universal Disorder | 2 Comments

The colour, the texture, even the shape–as if it had plopped out of the can to be sliced–I knew I’d seen it somewhere before. 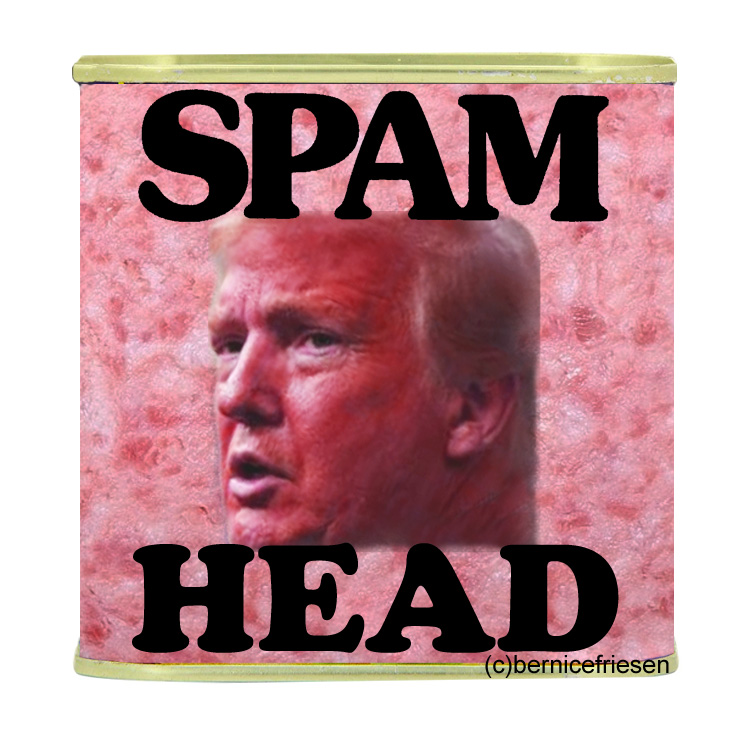 And then it came to me.

That head is Spam all the way through.

Posted on January 19, 2018 by bernicefriesen 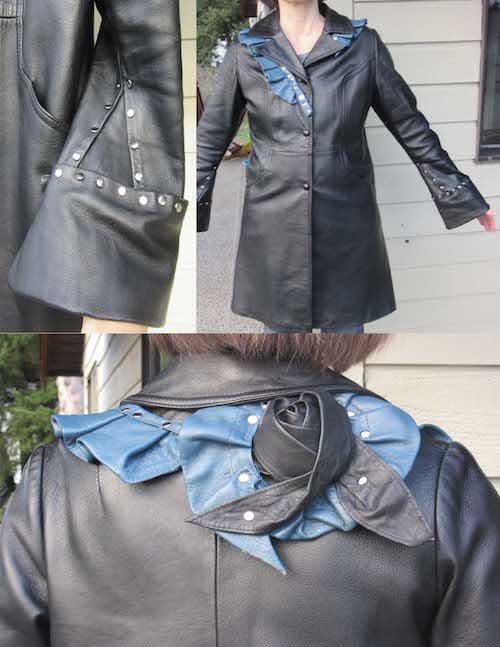 Sewing leather wrecks your hands. But what are you supposed to do when you find yet another second hand leather coat that fits you perfectly, except of course for the perpetual problem of the sleeves being too short?

You try to put on cuffs using just rivets, and some left-over black leather from a pair of mangled pants.

And no pins either. Once a hole is in leather, it’s there forever.

Many of my clothing revisions have been made as one would make a collage – no pattern or measurements, just a lot of eye-balling and hands-on-material. This worked more or less with the rivet challenge, though the pieces aren’t perfectly lined up and one added triangle of leather buckles out a bit too much.

But no need for physiotherapy afterward.

More and more, I’m beginning to think there is a strong similarity between making something “work” aesthetically, and making something work materially – and I mean making matter – stuff – work. I think visual artists would probably do very well at motor vehicle mechanics.

Around the neck, I added the rose wreath that I made for my first Revisionary leather dress that I’ve only won once because I feel upholstered in it — more like a bucket seat than a human being.

I like that line, and it’s mine, so I’m using it again.