The Seasons Are Horses 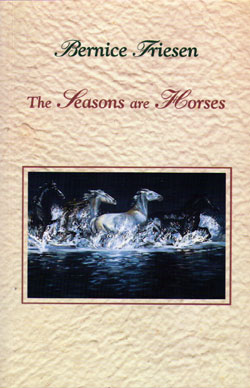 “Bernice Friesen calls it luck, but anyone who’s read her work could only call it talent.”

“I thoroughly enjoyed and applaud.”

“there are no cheap shots here, no easy observations, nothing that appears in uncrystallized form.”

“Friesen writes with the confidence of someone who knows she’s taken full advantage of hindsight, yet her narratives read as thought they’ve been written from ‘the inside,’ from the confines of a high school’s narrow halls.” 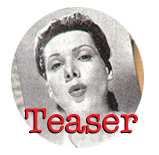 It sits on my desk in a sour cream container, in a nest of white and pink Kleenex. On it is a happy face, slightly screwy, and a squiggle of yellow marker on top for hair. The assignment is to carry an egg around for a week, pretending it’s your kid. Dad could hardly believe it when I told him Mrs. Bowman makes the Family Life class do this every year. He told me to do what I want – even scramble it and lose the ten marks if it would make me feel better. I don’t know why I’m taking this stupid class anyway. Just because Stephanie’s here and everyone else is doing it, I guess.

“…and at this point, the sperm meets the egg.”

Mrs. Bowman’s flabby cheeks get redder and splotchy. Reproduction embarrasses her almost as much as it embarrasses Stephanie. Stephanie’s only 16 like me, so it’s forgivable. Mrs. Bowman has three kids, so it’s not.

“Can you imagine Mrs. B. having sex?” I whisper, and point out Mrs. B.’s bulgy panty line. Stephanie once told me I was the funniest person in the world. She’s weird with jokes. She laughs the hardest at the dirty ones, but won’t tell them ; she absorbs them but then won’t let them escape.

“Our next topic is motherhood, the most important part of the Home Economics course,” Mrs. Bowman says, right after she skims over the pregnancy handouts with us. She’d been sick, so we were way behind in our notes. I think she got sick on purpose, just so she could skip over the sex part.

I squash the new heading under the scrawled notes on my last page, and wish I hadn’t been late for class so I could have gotten paper from my locker. I’d seen Stephanie, Lill and Faith whispering at the locked door, and when I’d got there, they’d stopped, guilty looks on their faces, especially Stephanie. At first I’d thought they were talking about me, but Mrs. Bowman was walking right behind me jangling her keys, so I couldn’t be sure….

The Vicky Metcalf Award for Best Young Adult Short Story in Canada.
(Title Story, The Seasons Are Horses, won, from the Book of the same name)